What Dr Silkworth wrote in 1939 would have been based on observation rather than meeting modern scientific standards of double-blind studies, peer-reviewed research, clinical testing, and epidemiology. That was just how science was done in 1939.  In contrast, the  Doctor’s Opinion, produced by Marijuana Anonymous in 2015 is based on rigorous, contemporary scientific research, discussing brain science, genetic predisposition, environmental triggers, trauma, stress, and co-morbid psychiatric disorders. It calls addiction “a bio-psycho-social-spiritual disease”

Some, but not all 12 Step programs have a Doctor’s Opinion in their official literature. None of the 12 Step sexual recovery programs has produced a Doctor’s Opinion.  This may reflect the limited state of research and science on sexuality, until the 21st century. Social politics may also be an influence where, post-sexual-revolution, any sense of looking for causes or treatment of sexual feelings and behavior could be seen as social control. Research on sexual offending and innovative clinical assessments and treatments have contributed to opening the door to explain the complex origins of sexual thinking and behavior.

Interestingly, contemporary science and the more recent Doctor’s Opinions confirm, via robust science, much of what was written by Dr Silkworth in 1939.

Will SA be the first “S fellowship” to produce a Doctors Opinion?

Alcoholics Anonymous, Adult Children of Alcoholics, Gamblers Anonymous and Marijuana Anonymous all have a Doctors Opinion in their official literature that had input from leading world experts.

Will SA do the same? Or will we continue repeating myths about AA, ignoring our massive failure rate and the significant part medical treatment played in early AA?

Will we finally fulfill the imperative of threefold recovery, looking at the whole person rather than hyper-focusing on the spiritual.

Will we truly take inventory of the massive failure rate in the 40 years of SA?  Or continue focussing on the comparatively few long-term recoveries, whose recovery may have as much to do with their positive genetic and health profile as to how hard they worked the program. Will we stop the judging, even bullying of those, who have a heart for God and recovery, but struggle with sobriety? 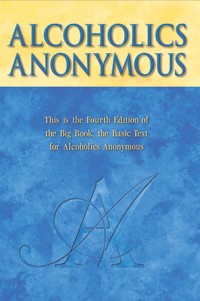 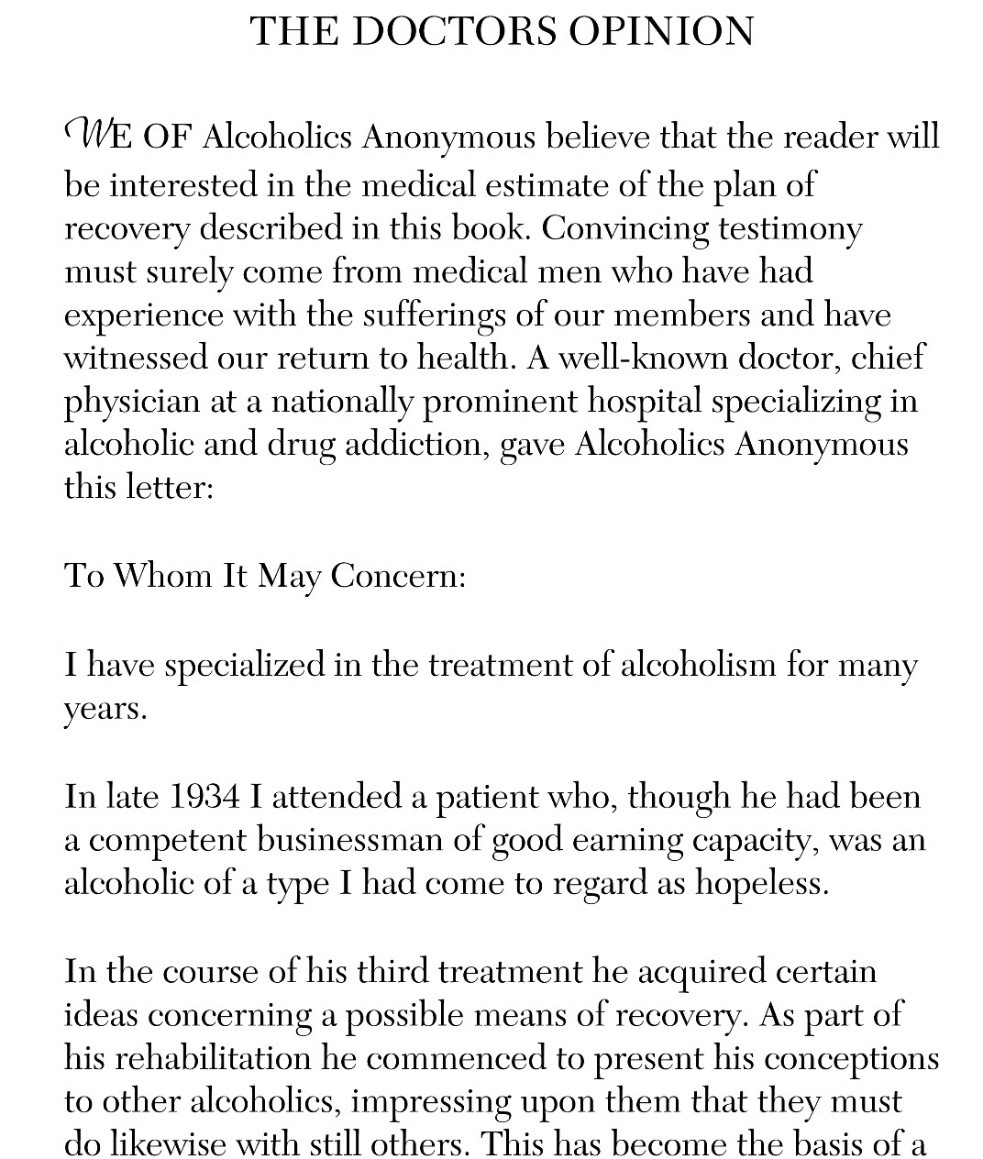 The Doctor’s Opinion is the first section of Alcoholics Anonymous after the preface and foreward, before Bill Wilson’s story.

Doctor William D. Silkworth, called, “the little doctor who loved drunks”, began an indispensable contribution to Alcoholics Anonymous during the early 1930’s from his position as medical director of Charles B. Towns Hospital,  New York, N.Y. …  well known then as a rich man’s drying-out place; a rehab for the wealthy, and it served a worldwide clientele. American millionaires, European royalty and oil sheiks from the middle east walked its halls, side by side: brothers in humiliation in bathrobes and slippers….   Silkworth played a major role in many of the early recoveries from active alcoholism, particularly those in New York. It’s estimated that he treated forty-thousand alcoholics during his career.   Silkworth.net

doctor, a neurologist, a specialist in alcoholism, at Charles B. Towns Hospital, New York, a private hospital specializing in alcoholism and drug addiction.”

he was the world’s greatest practical authority on alcoholism

Robert L. Custer, M.D., former Chief of Treatment Services of the Mental Health and Behavioral Science Service of the U.S. Veterans Administration, is widely considered to be the father of professional help for the compulsive gambler. In 1972, Custer, a psychiatrist, established the first inpatient treatment center for compulsive gamblers at the VA Hospital in Brecksville, Ohio.

Pathological [compulsive] gambling is a destructive, dangerous, and potentially deadly disorder. Yet, this devastating problem is treatable and Gamblers Anonymous [GA] has been and is the single most effective treatment modality for the pathological gambler. This book presents the principles and guidelines of GA which have been used by thousands of people who are being successfully treated.

Lack of in-depth knowledge of GA is the primary reason for any misunderstanding about its purposes, methods, and activities. Simply, it is a voluntary fellowship of compulsive gamblers gathered for the sole purpose of helping themselves and each other to stop gambling. It is a program of 12 steps that provide a framework of hope, structure, and friendship for those that have lived the program and successfully adapted to life. This book describes the routes on the road to this successful adaptation to a life without gambling. This road can be smooth or rocky, but in any case, it is never a painless journey while recovering.

GA is effective because it [A] undercuts denial, projection, and rationalization [B] identifies the serious implications of gambling [C] demands honesty and responsibility [D] identifies and corrects character problems [E] gives affection, personal concern, and support [F] develops substitutes for the void left by the cessation of gambling [G] is nonjudgmental.

The more a person understands Gamblers Anonymous, the more one respects and admires it for its principles, accomplishments, effectiveness, and the lives it has saved.

GA’s Sharing Recovery through Gamblers Anonymous also has an extensive 61-page chapter called Treatment, Research and Education: The Professionals. This chapter, with contributions by many treatment professionals, includes Dr Robert L Custer’s observations and theories about the illness of compulsive gambling. There are details of 4 different studies, run by 4 different doctors (one of them Custer) – their results and conclusions. Each of these doctors was working in veteran hospitals. There is a discussion about hospitalisation. There is no discussion about medication or brain treatment. Each of the doctors concludes that Gamblers Anonymous, at that time, held the highest success rate for treatment of compulsive gambling. 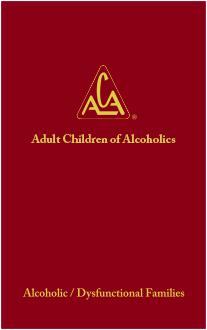 Later in Big Red Book is information on Dissociation and Post Traumatic Stress Disorder PTSD and their relevance to ACA recovery. 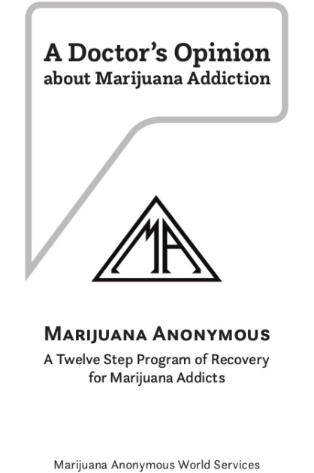 A Doctor’s Opinion about Marijuana Addiction  was produced by Marijuana Anonymous in 2015.  The author is Marvin D. Seppala, MD, Chief Medical Officer, Hazelden Betty Ford Foundation. It contains modern brain science and shows the progression of addiction science since AA started in 1935.

…Addiction, like many other diseases, has both environmental and genetic risk factors. The main risk factor for addiction, accounting for a bit over half of the risk, is in our genes. If you have addiction in your family, especially the immediate family, you are remarkably more likely to develop this disease. It does not matter if the others in the family are addicted to alcohol or cocaine, the risk of addiction to any substance increases with any addiction in the family.

There is no single gene for addiction and we do not currently have genetic testing that identifies those at high risk. It appears that a few hundred genes may be involved, complicating the development of such a test. Some people have strong genetic risk factors and others weak; this is where the environmental risk factors come into play. If you have strong genetic risk, exposure to marijuana may by itself be enough to result in addiction. If one of your parents has addiction, you are at least six times as likely as those without addiction in the family to develop addiction. If you have weak genetic risk, it may require significant environmental insults to tip the balance so that you become addicted.

Throughout my 27-year career working in addiction medicine, I have seen dramatic changes in our understanding of addiction; it is now defined as a chronic brain disease. This was certainly not the case when the original Twelve Steps were written in 1939, but even then it was referred to as a disease. Nor was addiction as a brain disease widely recognized when the MA text was first published in 1995….

Addiction research has developed since the 1950s and accelerated dramatically over the past 30 years. This research reveals a complex illness. It is often referred to as a bio­-psycho­-social­-spiritual disease because its manifestations undermine all of these aspects of life. We now have a good understanding of the underlying brain pathology that results in addiction.

Some people will wonder how a spiritual program can be effective for a chronic disease of the brain. The reward center is involved in all rewarding activities. It is there that recognition of differences in rewarding and pleasurable activities are noted and stored in memory. Highly rewarding experiences are prioritized and our memory of them ensures they are repeated.

Brain scanning studies have revealed that the experience of love as well as spiritual practices are recognized as rewarding. After a marijuana addict has stopped using, and brain function starts to return to normal, love and spirituality can be powerfully rewarding.

MA meetings and the fellowship of other Marijuana Anonymous members provide the experience of loving kindness on a regular basis. In addition, the foundation of the MA program is spiritual. The personal care and loving attention expressed by others, and the spiritual practice embodied in the recommended Twelve Steps of the program, directly and positively affect the reward center, the part of the brain that has been primarily altered by addiction. This spiritual program of action provides the necessary healing to allow an addict to attain a new life in recovery from marijuana addiction: a life with hope.

NEXT – The high-level of medical care in early AA: the lack of it in SA